The Tongariro Alpine Crossing is an epic 20km hike, with incredible scenery and special sites along the way. Unfortunately the weather wasn’t great, so the company I booked the tour with, canceled the trip. I ended up going anyway with two other people at the hostel, Alan and Vicky, who were kind enough to drive me and pack a lunch for me too. They were both more experienced hikers, so I was glad that there were so many opportunities for them to take photos while I caught up. They also had better cameras, so they’ll email me their photos, and I’ll update the post soon.

The trail was absolutely beautiful, there was so much to look at while we listened to the gentle stream running alongside us. After 4km of blissful walking, we came across Soda Springs and stopped for some photos. 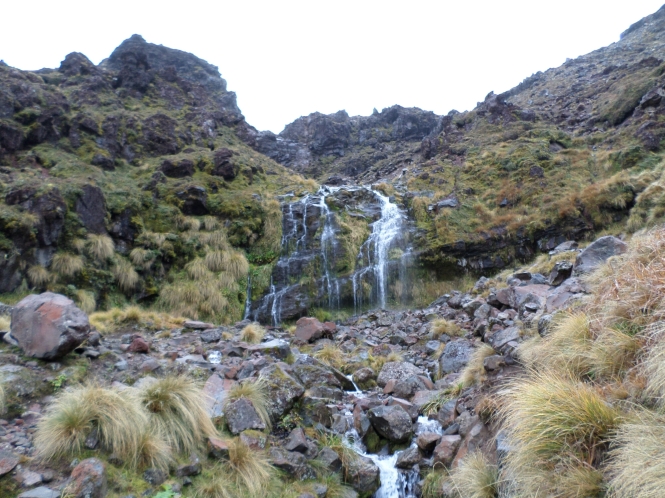 That was the easy part, soon the path became very steep and it was time to start climbing. As you can see from the elevation map, it gets rough pretty quickly. There was a lot of fog, so I couldn’t really see what was up ahead (probably a good thing). The flat bit just before the peak was a patch of desert (think of the Tundra episode from The Mighty Boosh), aside from the fluorescent poles to guide you in the right direction. Only my hiking buddies have pics of these (coming soon) because I had my hands crammed in pockets in fear of them going numb.

As we started going up the super steep bit, we were no longer sheltered from the howling wind. My slight fear of heights had stepped up a bit; to my left there was a super steep slope (covered in jagged rocks) and to my right was a smooth ramp which led into a misty abyss. The picture above is at the highest point we could safely get to. That isn’t snow by the way, it’s ice, all of it was icy and slippery. I was relieved to turn around and I’m hoping the selfie captures the fear in my eyes well enough.

The descent after that was quick by comparison, as I was eager to feel my fingers again. Ice had formed on my gloves, so they’re pretty useless once they’re wet. After passing by a pair of hikers wearing just shorts, we decided to stop for lunch. It tasted so damn good… With one more hour to go, and some more energy to burn, we kept walking.

Once we got back in the car, I promptly fell asleep, but when I woke up, we were overlooking Lake Taupo. It’s the largest lake in the southern hemisphere, and in the distance I could see Taupo, where I’d be riding next. I felt so out of my depth today, that I was happy to see something that I could easily do. For the rest of the evening I cocooned myself in the warmth of my bed and did some light reading. Tomorrow seems like a good day to sleep in.