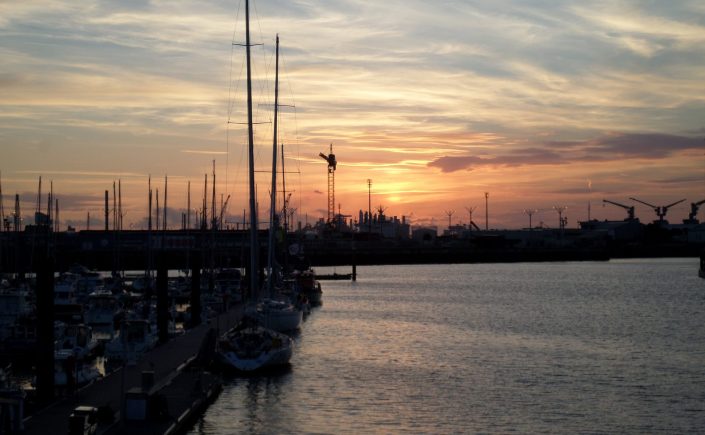 Today’s ride wasn’t great, I was lost for the first half, among the rolling hills. Every wrong turn sent me up and down extra hills and I ended up climbing twice as much as I needed to, plus 11km further. My original directions sent me to a highway which was closed and I unsuccessfully tried a work around. Perhaps I didn’t get enough sleep last night, because I missed a lot of turns. I went back to basics and wrote down fresh directions on some paper and it was fine after that.

When I entered Dunkirk, I cycled past plenty of nice boats and a war museum. A month ago in Croatia I watched a documentary on World War II, where Dunkirk was the site of the largest military evacuation in history. Over 250,000 soldiers left the beach and port here to retreat to England in 1940. I’m usually not too good with history, but I was keen to visit the museum and learn more about it.

Even though it took me seven hours to arrive at the hostel, it ended up being a good thing, because I met Slobadon (aka Slob) as he was checking in. He’s a kiwi (a New Zealander) who is riding his motorcycle to Serbia, where he was born. It was cool to see his gear and handy gadgets while getting insight into a different type of touring on two wheels. We ended up getting dinner nearby, where a Japanese restaurant seemed to be winning over all the customers in the area. I was so happy to get my giant bowl of ramen and I easily finished it off.

It’s a little funny that I’ve traveled so far from home, only to make friends with Aussies and our kiwi neighbours. But I guess when you’re always moving around, you just approach strangers for conversations and see how it goes. I’m glad it works at least some of the time, and although I’m biased, the fellow tourers are the coolest strangers 🙂