Today’s ride was slow and steady, about 30km to Takamatsu Port, a one hour ferry ride to Uno Port and 25km to Okayama. I decided not to rush things, since I have a 140km ride tomorrow and I wasn’t in a rush anyway. 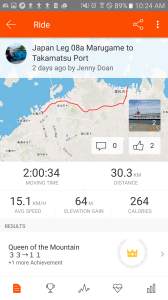 Some hills in the distance, but luckily there was no climbing today, I just made it to the terminal early and enjoyed the free wifi and numerous vending machines. The ferry itself was very pleasant, several trucks boarded first and then the cars, motorbikes and bicycles were loaded and secured.

After I reached Uno Port, I rode towards Okayama and marked various bike stores on Google Maps to find a replacement bike rack since mine broke yesterday. It was held together by three cable ties on each side, I replaced one of the broken ties and hoped it would hold for another 12km to the bike shop. They had a rack for me at the second store on my map and I opted to install it myself to save some money, but probably looked like a noob compared to all the pro mechanics around me.

Eventually I got it together and made it to my hostel for a quiet night in as I mentally prepped for my 140km ride to Kobe. The distance wasn’t ideal, but I planned to visit Himeji (80km away) but it was completely booked out due to the holiday week, but I wasn’t keen to pay three times the price, so I opted for two nights in Kobe instead. Not sure if that was the best choice, but I’ll track back to Himeji later on when I visit my cousin who lives nearby.

One thought on “Japan Day 14: Riding Marugame to Okayama”