The ride to Nara was short but absurdly steep, that super peak was 400m of elevation across a 2km stretch, consequently it took me an hour to push my bike up that section. The downhill section was pretty terrible because the road had these circular indents in the ground, I’m guessing it was to increase the grip since it was so steep. But it was too bumpy and dangerous to ride down the hill, so I walked/ran alongside my bike instead. 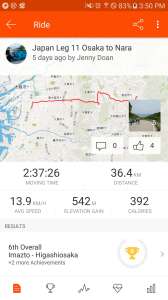 However upon arrival at my accommodation , I was pleasantly surprised to meet a fellow Australian cyclist who was riding in the opposite direction as me (Tokyo to Fukuoka and Busan to Seoul) and I was able to warn her about the killer hill today. Her name is Tabitha and she has a blog too and it’s handy to have a sneak peak of what is in store for me later in my journey. We ended up chatting over some hot chocolate and having a good time discussing touring, how we ended up in Japan and generally pondering about life. My hostel happened to have the most comfortable beds I’ve experienced on my trip so far. Most of the time the futons are basic and they do the job, but this place had thick mattresses, giant fluffy blankets and screens on the windows to let in some fresh air.

Unfortunately Tabitha was only staying one night, so she went off to the park to see some deer in the park while I went to find a well deserved feast for dinner. I checked TripAdvisor for the number one restaurant and it was an Italian place called Nino’s. I was skeptical because I have stuck to Japanese places so far, but with over 200 positive reviews, I thought I’d have a try anyway. It turns out the food was great and sitting at the counter and chatting to everyone was really nice, just like being at home. At the end of my meal they gave me a little card that said something along the lines of “on your birthday you will get free dessert, but since you might not be back on your birthday, you can have it today instead”. So I got some bonus dessert and Nino’s wife gave me a beautiful piece of Japanese calligraphy and an origami deer. With all the good food in my belly and lots of sore muscles, I slept well, as the rain gently fell outside.

Nino and a box of pineapple cakes which another customer brought in to share.

The deer are very famous in Nara and in the Shinto religion they are believed to be messengers from the gods. There are over a thousand deer in Nara Park and for 150 yen (~$2 AUD) you can buy crackers to hand feed them and take photos with them too. They’re quite gentle and will even bow to people, hoping that they’ll get food in return of course.

Within the park there are lots of different temples and shrines, but there were two main sites I wanted to see, Todai-ji (the temple with Japan’s largest bronze Buddha statue) and Kasuga-taishi (a temple lined with hundreds of stone lanterns).

After a day of exploring I headed back to the hostel for a simple dinner of noodles and eggs (gifted to me from Tabitha, convenient since she didn’t want to carry them on her bike either) and had a big night of rest again. Nara was a nice break from the big city and the peace and quiet was appreciated.