I left the hostel nice and early at 7.30am and enjoyed the quiet roads on the way out of Vancouver. Luckily there were lots of useful signs, directing me towards the Central Valley Greenway, which had perfect cycle paths before I reached the highway. While highway riding isn’t always fun, there was a wide, sealed shoulder for me and a railway ran parallel, which meant the route was quite flat and straight forward.

Around lunch time it got really hot and I stopped by a petrol station to use the bathroom and have an ice cold slushie. Later on I discovered that the region had one of the hottest days on record, Chilliwack beat the previous max temperature record, set 90 years ago. My Australian ability to withstand soaring temperatures must have kicked in, because I just kept going and assumed it was a typical summery day in Canada. When I approached the major highway, a killer tailwind kicked in and I managed to blast through at 30km/hr. Shortly afterwards the scenery changed to grassy farmlands and even more mountains along the horizon. 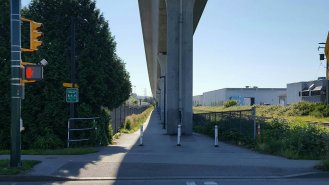 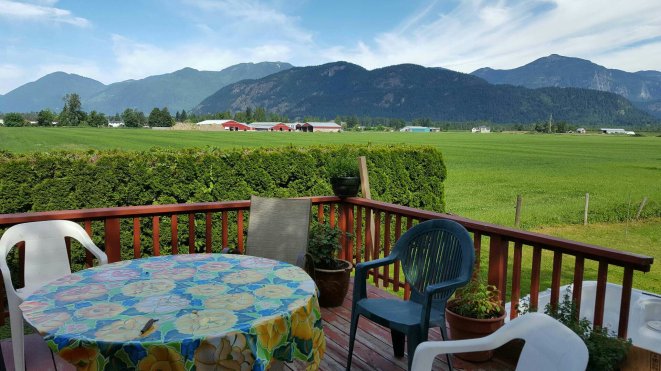 I arrived in Chilliwack where I was staying with a host from warmshowers which is a network of hosts who offer their homes (either a spare bed or lawn space for campers) to cycle tourers abroad. It has things like feedback and profiles, so you can get an idea of who you may be meeting and you can message each other to arrange accommodation.

My hosts, Tom and his parents, were really nice and offered me a cold beverage upon arrival and we chatted for a bit before I had a shower to wash off the seven hours of sweat and dirt from the road. The whole family are keen cyclist tourers and they knew a lot about the area, so I was happy to get some advice about routes and things to see. For dinner we had some BBQ burgers and everything was so delicious and filling, there was even ice cream for dessert. I must have drank at least a litre or two of water, juice and iced tea and by night time I was no longer dehydrated and fell asleep really quickly.

Today’s ride was mostly easy, I managed to complete the first 55km in under three hours and chose to bypass a sweet sounding town named Hope. I regretted it about 5km later, when the giant hill started. It was too steep to pedal, so I pushed my bike for a lot of it and took a few breaks in the limited shade. It ended up being a 800m climb, but at least there would be a nice downhill for tomorrow’s ride.

Sunshine Valley was pretty nice, but there weren’t any shops in the area, so my dinner was a backpacker’s smorgasbord: instant noodles (the ones I made from the Yokohama Cup Noodle Museum), an apple, a toasted English muffin with crunchy peanut butter and a muesli bar. My accommodation was a really nice airbnb place, I had a huge bed and the neighbourhood was quiet, so I slept for a solid nine hours. 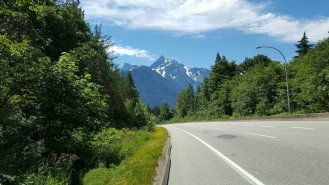 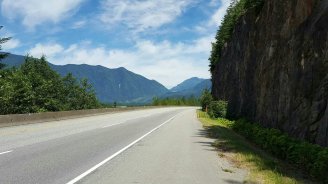 Unfortunately my Garmin failed today, so I couldn’t see my efforts over the seven hours. I started off with a big downhill section, before climbing roughly 800m to reach Manning Park for lunch. The breeze was so cool as it came over the river and it offered some relief from all the gross sweat that built up from the climb.

Lunch was quite nice, but it was a bit more expensive than what I was used to in Japan, it seemed like most meals under $10 only existed in fast food chains. But I really needed the break, because I had another 50km to go and 600m of climbing to reach Princeton. There were some roadworks on Highway 3, as they were resealing the road, but I was able to bypass the traffic jam on my bicycle. My progress was slow and it felt like the freshly rolled tarmac was scorching in the sun, just like me. 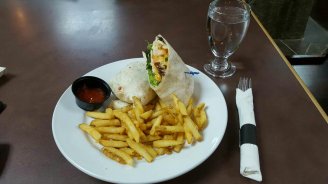 It was nice to reach Princeton around 5pm, where I headed to the supermarket to get some snacks and dinner. I know it’s dangerous to go grocery shopping when you’re hungry, but I was really craving fresh fruit and vegies. There was a whole row of dispensers for assorted nuts, muesli and lollies. 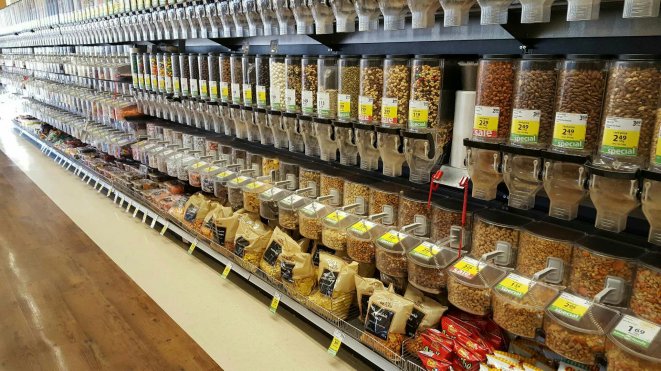 In the evening I noticed my back was really sore and when I looked in the mirror I realised that my back was sunburned. My jersey has a mesh part in the middle of back for airflow, but after three days of summer riding, I got roasted anyway.

Sunburn aside, I put my feet up and ate dinner in bed while watching a random assortment of TV shows. I was slightly creeped out being alone in a motel, but I purposely ignored any scary motel related movies I’d seen in the past and went to sleep.