For today’s ride, I rode along Highway 97, which was surprisingly very quiet and mostly easy. I would have liked to try the Kettle Valley Trail, which travels on the other side of Okanagan Lake, however the trail can be rocky and sandy, which isn’t ideal for my loaded touring bike. Most of the hills were manageable on granny gear, except for that first mega steep hill. I felt like I was really finding a good rhythm, instead of struggling so much during those first few rides. 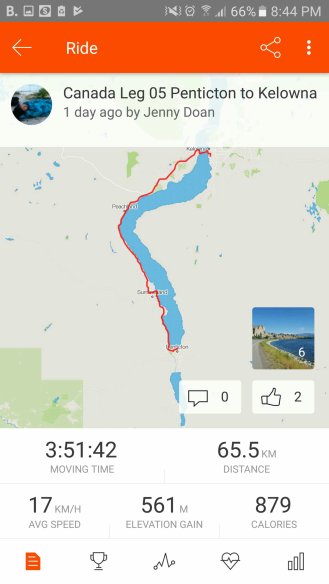 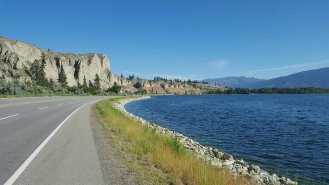 Since today’s ride was so short, I didn’t need to stop for any breaks, I just hopped off my bike for a little bit after the last hill, appropriately named Drought Hill. 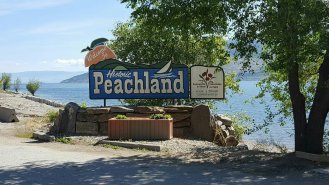 More signs to add to my collection, I’m aiming to make a collage at the end.

Arriving in Kelowna was quite pleasant, I stayed at Kelowna International Hostel and the people there were so nice and friendly. With three nights to stay and explore, I was happy to do some cooking, especially since I was craving vegetables. In Canada it can be tricky to shop for one person, since the portion sizes at supermarkets are enormous compared to Japan. I ended up getting a delicious large, Hawaiian pizza from the local pizza shop and making a giant batch of stir fry, which lasted me three nights.

I rode my bike uphill to Okanagan Lavender and Herb Farm, where I took a guided tour through the gardens. We learned about the process of growing and harvesting lavender and the different species that thrive in the area. The gardens were so beautiful and they had plenty of help from the bees from the neighbouring bee farm.

I always wondered why esssential oils were so expensive, and it makes sense when you consider the amount of effort it requires. For lavender oil, it takes at least 100kg of flowers to make a litre of oil and on this farm they pick everything by hand and distill it onsite. There were lots of other beautiful things, like roses, lemon scented herbs and all sorts of plants for beauty and culinary purposes too.

For the rest of the day, I relaxed and did some personal admin, mainly booking accommodation, since the Rocky Mountains area gets really busy and full this time of year. It gets quite hot during the day, so it was a treat to sit in the shade or air conditioning and read a good book.

Day 12: Canada Day at the Waterfront

The Canada Day celebrations are pretty laid back here, at Waterfront Park they had food trucks, stalls and several stages for live music. Indoors at Propera Place (I think it’s a hockey stadium usually), Folkfest was kicking off, which had international food stalls and a giant cake which they cut at 1pm. I arrived early and was close enough to get a slice fairly easily, however it took more than 20 minutes for the team to finish cutting the whole cake. 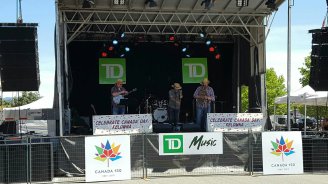 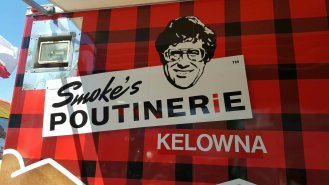 Afterwards I sat out on the lawn and enjoyed some folk music and calorie dense food like poutine and donuts. It was such a beautiful day and it great to see families out and about, and dogs dressed in red and white scarves. My hostel had a big Canada Day party, but I gave it a miss since I had to get up early for my 150km ride to Malakwa tomorrow.