Today’s ride was pretty rough, my legs were still a little sore and the climbing started right away. I noticed a bunch of cyclists riding past, all wearing similar jerseys with “Sea to Sea” on the back. It turns out they were a group of 100+ cyclists riding from Vancouver to Halifax (a bit over 7,000km) in ten weeks and raising money for poverty. Each cyclist raised at least $12,000, with a total over $1.5 million this year. They were nice enough to let me use their rest and food stops along the way, which really came in handy as I became more physically and mentally exhausted throughout the day.

After the first huge peak, going past Rogers Pass, there was a great downhill part, but soon enough it was climbing time again. There was a rock slide on the highway, so construction crews were clearing the rubble and holding back traffic. Luckily I tagged along on the end of the cyclist group and we had an escort take us through that last climb. By the 100km mark I was so exhausted, all the other cyclists had super light road bikes and a truck to carry their gear, so I felt like a pack mule as I hauled myself up the last few hills. 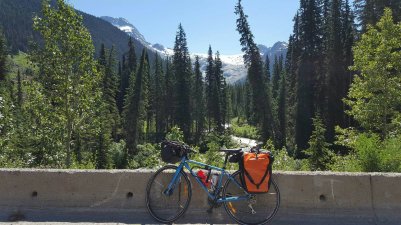 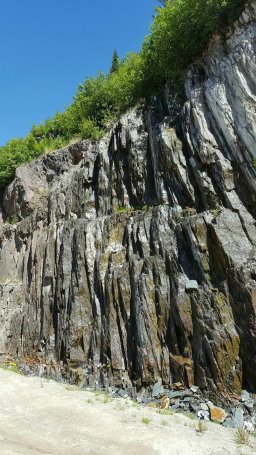 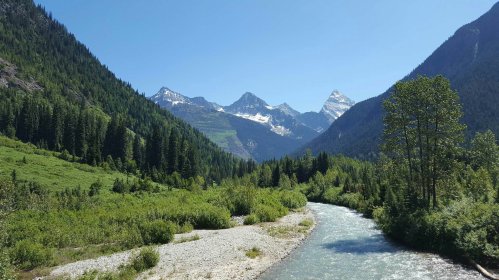 By the 125km mark, it all flattened out and I could see the huge row of mountains on either side of the highway. I was on the home stretch and had to keep pedalling to avoid the mosquitoes, which quickly latched on when I got off my bike to walk. 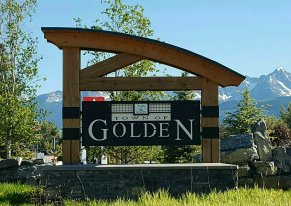 Arriving at my hostel was an absolute delight, the owner helps out cycle tourers on WarmShowers and gave me a 50% discount, plus she let me have a private room for the first two nights. I took a shower and it felt amazing to wash off the layers of road grime, sweat and sun cream. I had left over pasta in my bag and feasted on an epic portion of carbs and calories. Even though the hostel was next to the railway line, I slept for a solid ten hours and didn’t hear a thing.

After two weeks of boring breakfasts like cereal, toast and oats, I indulged in a big hot breakfast with eggs, bacon and sausages. For most of the day I watched Netflix, lounged on the couch and snacked on anything sweet from the free food shelf in the kitchen. It was quite a warm day, roughly 30-35 degrees until the evening, but eventually I got up and rode my bike along the Rotary Trail, which goes 10km around the town. It was really well signposted and took me to the Kicking Horse Pedestrian Bridge, Reflection Lake and along the river. 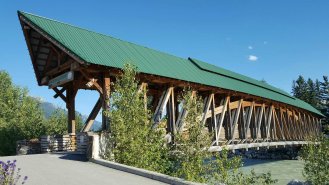 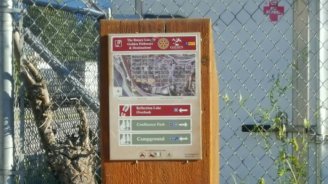 Back in the hostel, some more cycle tourers arrived and camped in the backyard and I chatted with them about their journeys so far. We were all in the same boat, pretty tired from riding so much, but happy to have some rest and a nice place to sleep.

I went hiking with a fellow hostel guest, Roman from Czech Republic, and we headed to the Kicking Horse Resort, which has a gondola which takes you to the top of the mountain. The views were spectacular and during the winter the resort has some insane double black diamond slopes. Surprisingly it wasn’t very busy, just a few hikers, mountain bikers and a wedding party. We headed up to a hike called “Stairway to Heaven”, where there was snow along the way and incredible mountain views in all directions. I was in awe of the spectacular surroundings and soaked it all in before heading back down the gondola. 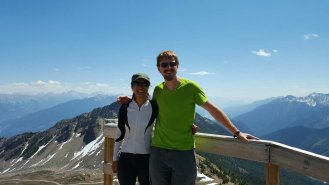 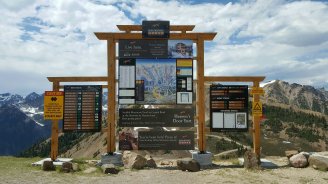 View from Kicking Horse in Golden

After we returned to the hostel, I packed up my things and went to bed early to prepare for tomorrow’s ride, which would be almost as hard as my Revelstoke to Golden ride. On the bright side, it meant that I had one last hard ride before the easy and flat bits through the prairies.