My final ride in my South Korea tour, it was a bit rainy and it looked like the cherry blossoms were on their way out too. 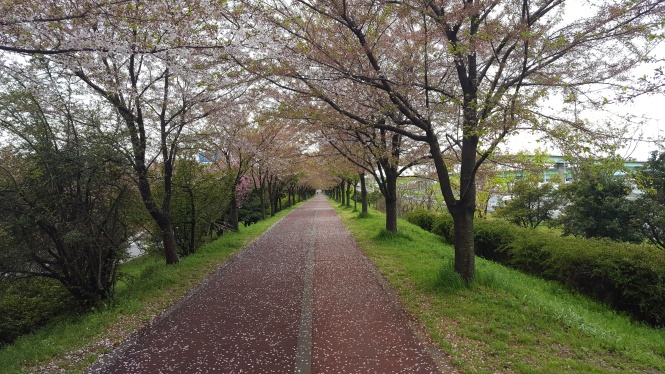 Luckily the ride was very short and easy, so after sleeping in at my nice hotel, I cruised along the straight path. I wanted to sprint with the tailwind, which I hadn’t felt in the past week, but I also wanted to savour the last little ride in this lovely country. 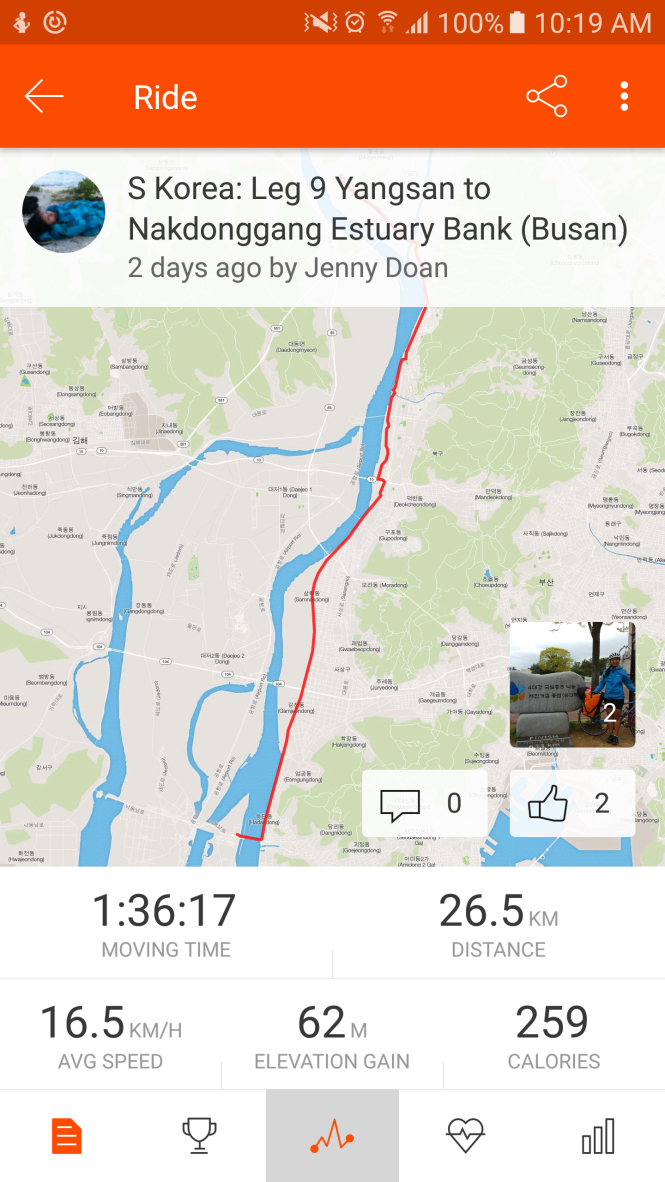 There was a little selfie stand at the finish line, so I was able to take a nice picture with my bike before I headed into the certification centre to get my stickers. 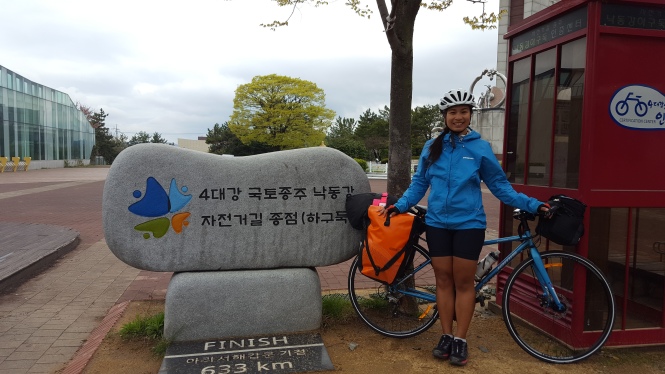 I finished four routes and the Cross Country challenge, but there are still seven more routes and two challenges left. 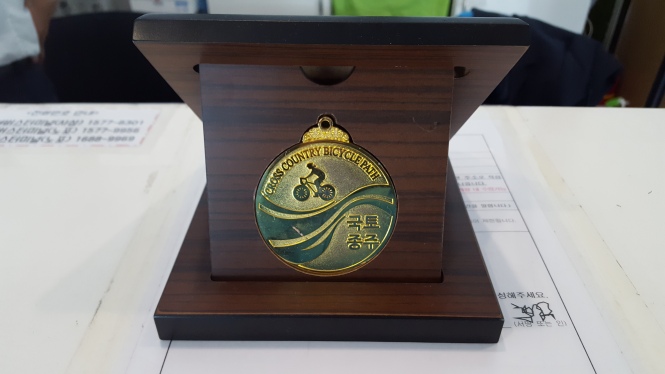 I cycled a bit further to get to the metro and noticed some interesting differences between Busan and Seoul:

It turns out non-folding bikes are only allowed on the metro on weekends, but the security guard let me stay since it wasn’t busy and I probably seemed like a silly but harmless tourist. Checking into my guesthouse was great, my host gave me a bunch of maps and city guides to plan my stay.

By 4pm I was already hungry and headed to Seomyeon Pork Soup Alley to get their signature dish.

Women making soup in the huge pots along the alley

There were a dozen locals having an early meal too and within a few minutes I was enjoying my meal of pork and noodles with rice.

Shortly after I went for a stroll around the city and looked for a place to get a massage. I was a bit weary because I didn’t want to accidentally get a “special” massage, but luckily I found a legitimate place in the city centre. The masseuse did a great job and it was a relief to hear the crunching noise when she cracked my back.

I headed back to my guest house to chill out and talk to my dorm friend and went out to have some drinks with some guys in the other dorm. We headed to a nightspot near Gwangandaegyo Bridge, which lights up alongside all the neon signs nearby. But I forgot to take a photo before midnight, when it switches off again, although I saw a bouquet vending machine which was kinda cool. 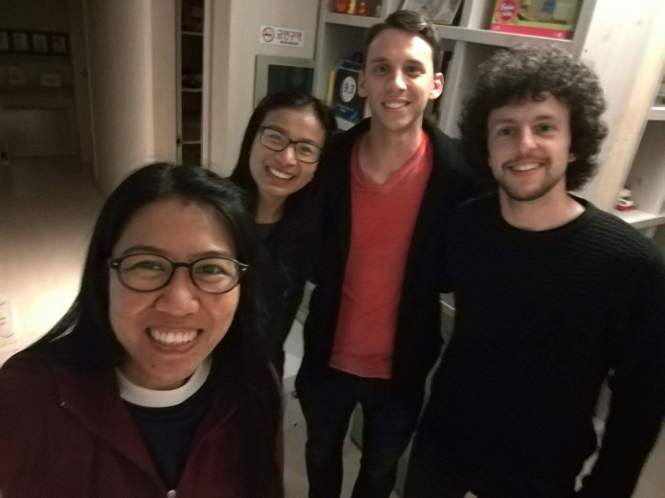 From the left, Tayettz from the Phillipines, me, Justin from the US and Marc from Spain

It was too cold to swim today but it was a beautiful day to walk along the beach and dig into some seafood. 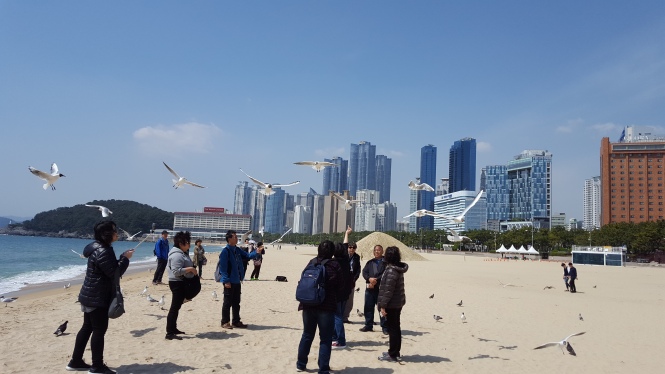 The mermaid statue based on the legend of Princess Hwagok

I caught a bus to Haedong Yonggungsa Temple and it was an amazing place to experience. The mix of the sounds and smells of the ocean with monks chanting was really peaceful. 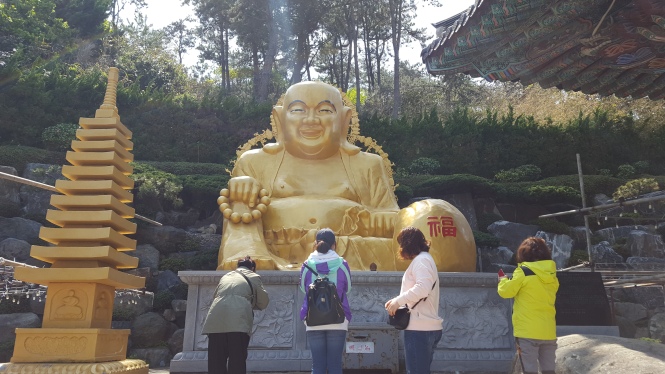 On the way back I stopped by Busan Art Museum, where they were featuring Yoo Youngkuk, a Korean pioneer in abstract art. It was interesting to see his work throughout the different phases of his life; his study in Tokyo, his work in Korea during the rough period post World War II and the Korean War and then his solo career. He was determined to practise his art for 10 hours a day until he turned 60, it was fascinating stuff.

For dinner I headed to Nampo, a suburb in downtown Busan and tried a noodle shop near the mural alley. 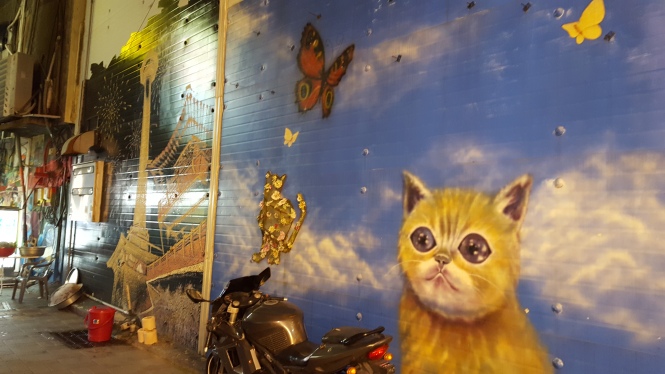 The main shopping strip had the usual stores, mostly clothes and beauty chains, but there was one place that was out of the ordinary. Gentle Monsters is a designer sunglasses brand and their store was like a museum. Each room had a different theme and even though it was way out of my price range it was pretty cool.

A pair of robots typing, answering phones and handing things to each other

Afterwards I headed to Busan Tower to get a view of the city, but it was closed for renovations, so I headed home and got some extra sleep.

I signed up for Ben’s Free Walking Tour, which is run by a group of uni students who want to help tourists get to know Busan. We started in Nampo and headed to Jagalchi Markets where you can get loads of fresh seafood everyday. 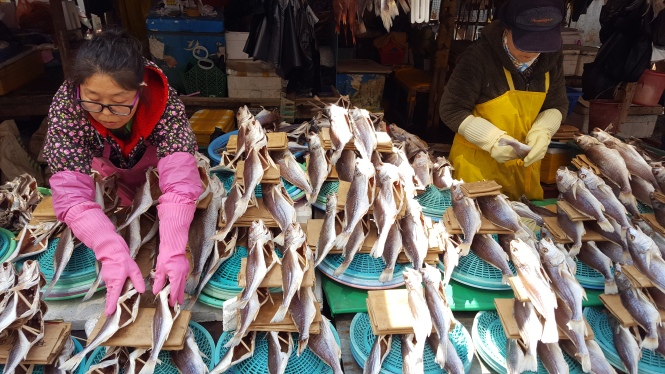 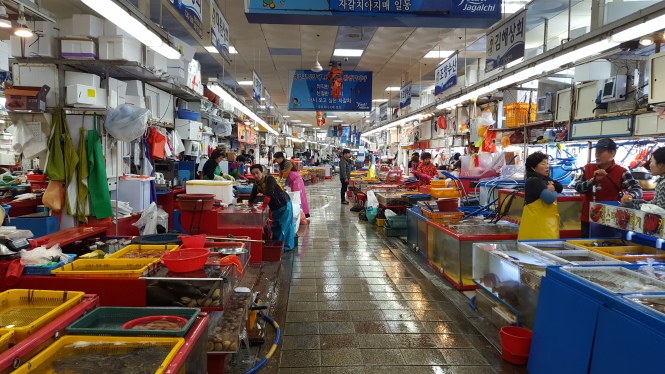 The indoor section, a little bit more expensive but they have fancy things like abalone 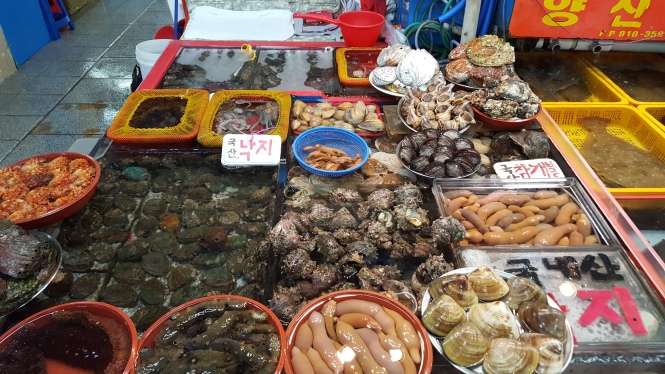 Across the road is BIFF Square (Busan International Film Festival), which started in 1996 as a step forward in attracting tourism, new films and talent in the industry. 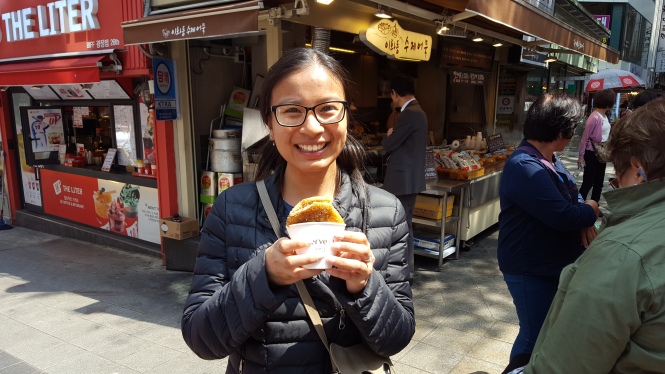 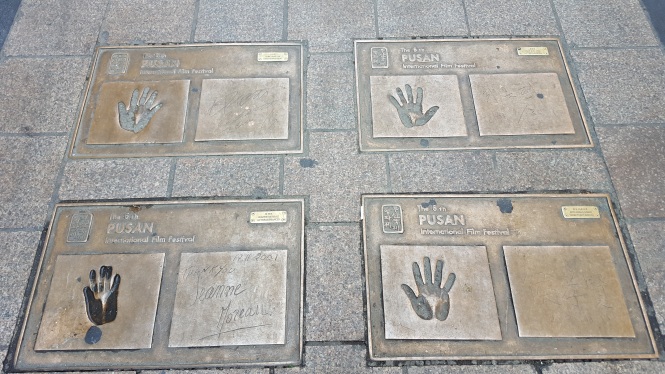 Handprints of the winners for BIFF each year

We entered the food market and had seafood pancakes for lunch and wandered around for a bit.

The ingredients for all the wonderful side dishes 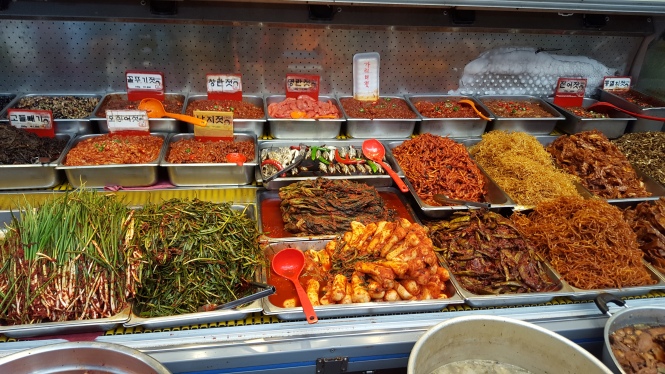 At the end of the road we checked out Bosu-dong Bookstore Alley, which is popular among students since the secondhand books are much cheaper. Even though the books are stacked to the ceilings, the owners know where to find things.

The last stop was Gamcheon Culture Village, a colourful array of houses stacked up along the mountainside. During the Korean War a lot of refugees fled to Busan and they ran out of space to build houses, so they moved uphill. In 2009 artists came in and painted murals along the streets, stairs and alleys, transforming it into a tourist hotspot.

It was so cool to wander around and see all the different paintings around each corner. They all had a positive message, like the themes of community and celebration. 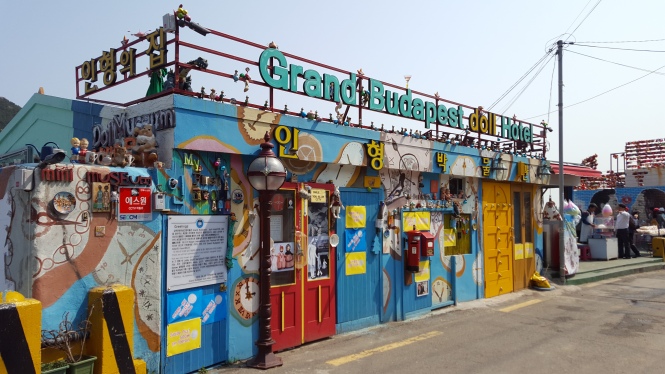 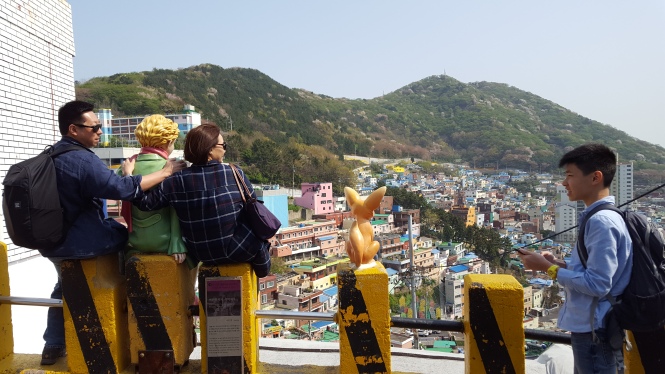 After a long day of walking I was keen to rest my feet and have an early night. I really enjoyed exploring Busan and look forward to fitting in some last minute sightseeing before I leave for Japan in a few days

Today was pretty cruisy, I sent off some postcards and surprisingly it’s cheaper to send letters from Korea to Australia than send mail locally in Australia. I packed my things and headed to the airport for my 1 hour flight to Jeju Island. Unfortunately my flight was delayed and I didn’t arrive until 5.30pm. The island is more known for it’s natural attractions rather than the nightlife, so I just had dinner and chatted to my dorm friends about what they’ve seen so far. With only 3 nights in Jeju, I’m planning on a group day tour and a hike up Mount Hallasan, the biggest mountain in Korea. Fingers crossed the weather stays nice.