Mount Hallasan is the tallest mountain in South Korea, standing at 1950m above sea level, it’s also the 3rd and last UNESCO site I would see during my visit to Jeju Island. There are several routes around the national park, but only two reach the summit, so I planned to go up via Seongpanak, 9.6km long and descend via Gwaneumsa, 8.7km long. This is because Seongpanak is easy to reach via a 30 minute bus ride (the 871 leaves the intercity bus terminal every 10 minutes from 6am) and it has a store for drinks and noodles at the last rest stop.

Like most outdoor activities in Korea, it is very well organised, with progress markers, bathrooms and rest stops at regular intervals. The cut off time to reach the last rest stop is 12pm (or they don’t let you proceed to the summit), and the roundtrip is estimated to take 7-9 hours. There are also plenty of people doing the hike each day, at various fitness levels, so it was perfectly safe for me to hike alone, with only a bottle of water and a small pouch of snacks. 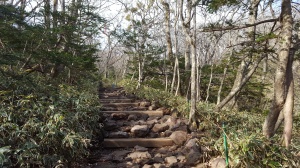 I started nice and early at 7am and even though the first half was marked as easy, I wasn’t too good with walking on the rocks. A lot of other people had walking sticks and some pretty fancy gear, but I decided to just go slowly and not sprain my ankles along the way. Most of the route had cover from the trees, except for the giant staircase in the last 40 minutes up to the summit.

On that last part I met some English teachers from the US, who had been in Korea for two years already. It was cool to chat to them and one of them was planning on a cycling trip too, so I was happy to give her the details on the route. I made it to the top in 3.5 hours, much faster than I had expected, so I had plenty of time to pace myself and take it easy on the descent. The view from the summit was a bit cloudy, but I don’t think anyone minded since they were enjoying their food and taking photos. 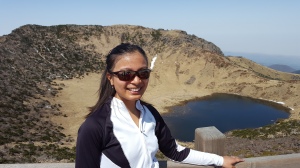 Me at the top!

The first part of the Gwaneumsa trail was a bit tricky because there was still some snow melting, which made it a bit slippery. The route was also a lot steeper and given that my legs were already tired, it was pretty difficult to keep going, although the top part was a bit more scenic with the rolling hills and valleys. I made it to the bottom in 3.5 hours as well, so I finished quite a bit earlier than expected. 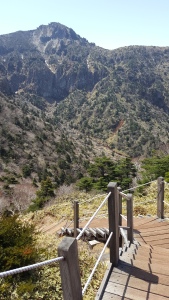 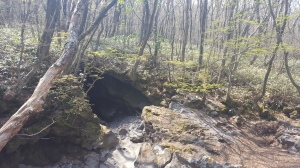 I was running low on water so I went to a convenience store and grabbed a bottle of orange juice, although it turns out it was rice wine, not an ideal post-hike beverage. The shopkeeper must have thought I was insane or something, but she let me fill up my water bottle with actual water, so that was good enough for me. On the bus ride home I spoke to another English teacher, who happened to be training for an ultra marathon, I was already wrecked from 19km of hiking, so I think I’d pass on a 60km hilly run next week.

It was such a relief to walk on level ground again and I thoroughly enjoyed doing a load of washing and putting my feet up. I was scheduled to fly out the next morning, so I just packed my things and got ready for my last few days in Korea.