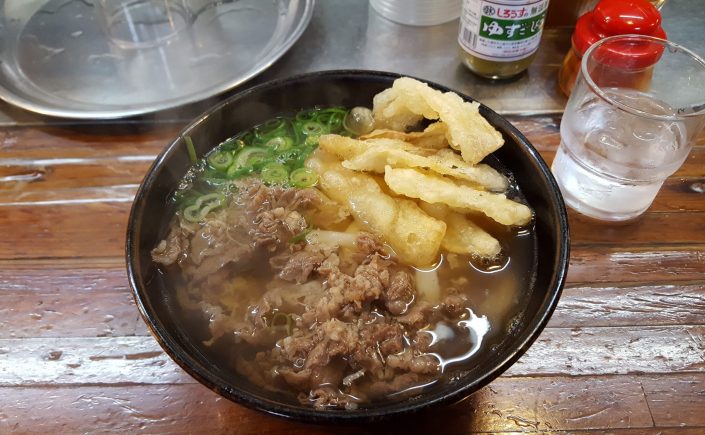 I have planned a two month trip through Japan, starting with Fukuoka and ending in Tokyo, broken up into five parts:

I’m not sure if I can take on the Alps, but plan B is to hug the coast instead and check out Mount Fuji before Tokyo, instead of afterwards. My itinerary says it will take around 2,000km but it’s spread over 28 rides, since there are a few clusters of nearby cities that I want to visit. I’ve never been to Japan either, so I’m expecting mountains, loads of good food and some nice countryside riding between the big cities.

I arrived at Hakata Port and quickly moved through customs by 8.30am but check-in at my guesthouse didn’t start until 4pm. I dropped off my bags and rode into Hakata Station, one of the main parts of the city, to get the basics; a SIM card and some cash from an ATM. Above the station there was a 10 storey shopping centre, 3 of which were dedicated to food, plus 2 underground levels for bicycle and motorcycle parking. It reminded me of Amsterdam, where there are cyclists rolling around without helmets, packed bike parking lots and drivers giving way to bikes.

There are shrines and temples scattered across the city, so I stopped by Kushida Shrine to take a look before heading to Hakata Machiya Folk Museum. It was pretty cool to see these old style buildings and catch a glimpse of what the city used to look like. 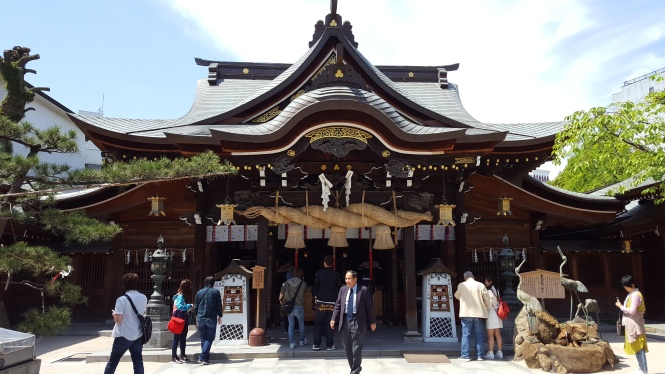 A lady was using this giant weaving machine, I still don’t understand how it works.

Lunch time came around and I tried out one of the restaurant chains called Ichiran, which specialises in tonkotsu ramen, the specialty of Fukuoka. The ordering system is called izakaya, where you order and pay at a vending machine, get a ticket, pick a seat and give your ticket to a waiter. I chose the counter section, where you get a little booth to yourself and once your food comes out, the little curtain comes down and you can eat in peace. It was the ideal setting for an introvert to quietly enjoy a delicious meal and the restaurant filled up quickly. 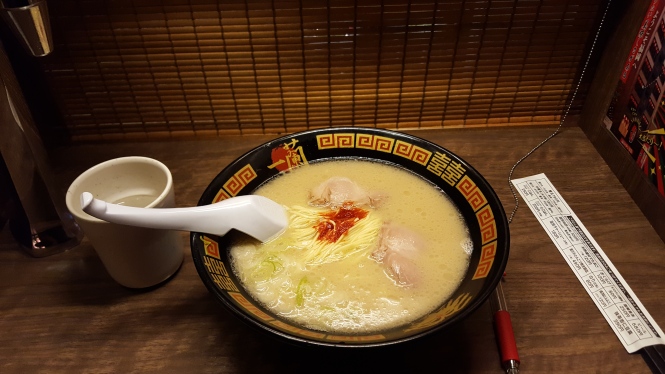 Around the corner is ACROS park, where they have planted trees all over a building, making it look like a mountain. I climbed up 13 storeys to the top, although the observation deck facing the water is only opened on weekends. Although there are a lot of buildings, it was nowhere near as dense as the cities in South Korea. The gardening and landscaping here is very impressive, I checked out Ohori Park, which had a large pond, waterfalls to block out the city noises and a zen garden. Across the road I visited Fukuoka Castle Ruins, although only the base and some turrets remained. 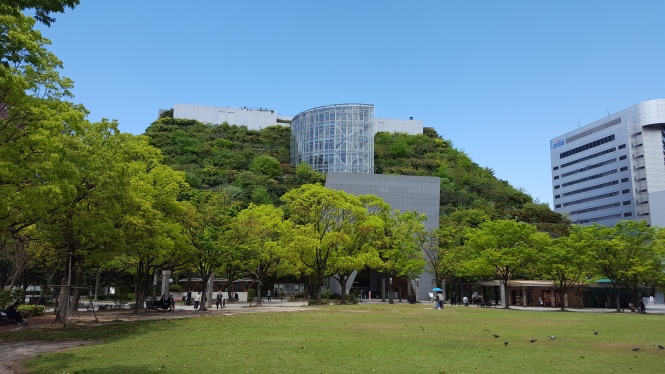 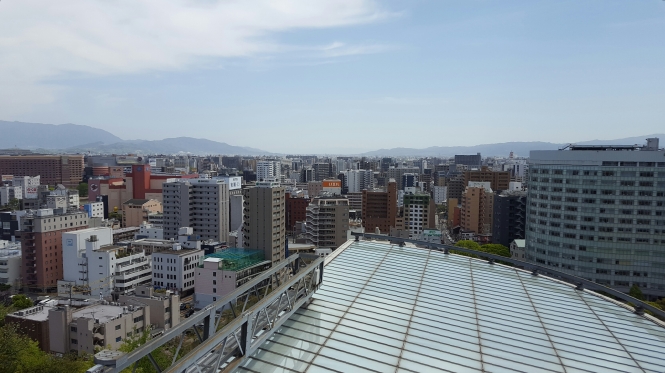 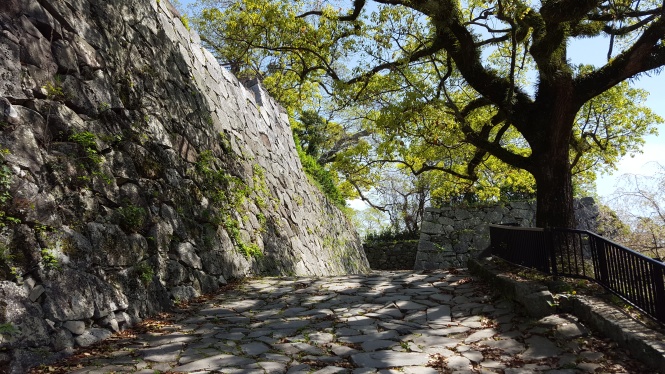 Remaining base of the castle

On the way back to my accommodation, I came across Tocho-ji, a Shingon Temple which has the largest seated wooden Buddha in Japan. It’s 10m tall and has a passage underneath with paintings, although I didn’t really understand the stories behind the artwork, so it was lost on me. Photos weren’t allowed inside, but around the temple was pretty impressive.

After checking in at my hostel, I showered and went to find dinner, the region produces a lot of wheat flour, the main ingredient for udon, so i definitely needed to try it out. It was amazing and surprisingly filling and cheap, definitely something I could get used to.

Day 2
I woke up late today, but decided to skip breakfast and have an early lunch at Udon Taira, which is one of the best places to get udon in town. It opens at 11.30 and I arrived 10 minutes early and waited behind 20 or so people. Luckily the service is really fast and people efficiently eat their meals and leave, so it didn’t take long to get my spot at the counter. I ordered the beef udon and watched the production line of staff make the noodles, soup and tempura, which was awesome when it all came together.

I rode to Fukuoka City Museum and rented an audio guide, since most of the displays didn’t have English descriptions. The permanent exhibit covered the history of Fukuoka and it was much more thorough than I had expected, starting from 1000 BC to present day. They had some interesting articles, including the Gold Seal, a national treasure which was gifted by Chinese Emperor Gwang Wu in 57 AD.

Giant floats for the summer festivals

Nearby I went to the Fukuoka City Disaster Prevention Centre where you can try some demonstrations of natural disasters, like a magnitude 7 earthquake or 100km/hr winds from a typhoon. 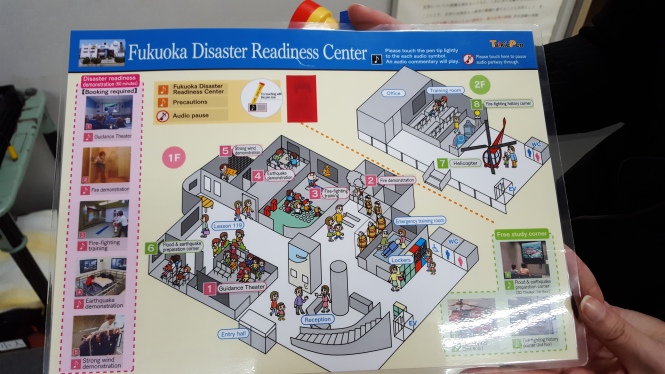 Around dinner time I headed to the central station to look for yatai stands, which are clusters of about four food stalls around the city corners. They serve a little bit of everything and it’s a quick way to get something to eat on the way home.

Day 3
For my last day I headed to the Botanic Gardens and Zoo, where you could get a ticket for both places for 600 yen ($7.50 AUD). It was absolutely packed with school kids on excursions, but it was still cool to see some interesting stuff.

Afterwards I went to the Asian Art Museum, which was currently housing the Fukuoka Art Museum’s collection while it is undergoing renovations. The two main exhibits were focused on tantric painting and light, so it was really mesmerising to take it all in.

I headed back to the accommodation to sort out dinner and pack up in preparation for my first ride in my Japan tour. I was excited but a little nervous about my ride, although hopefully cycling on a weekend should have less traffic.