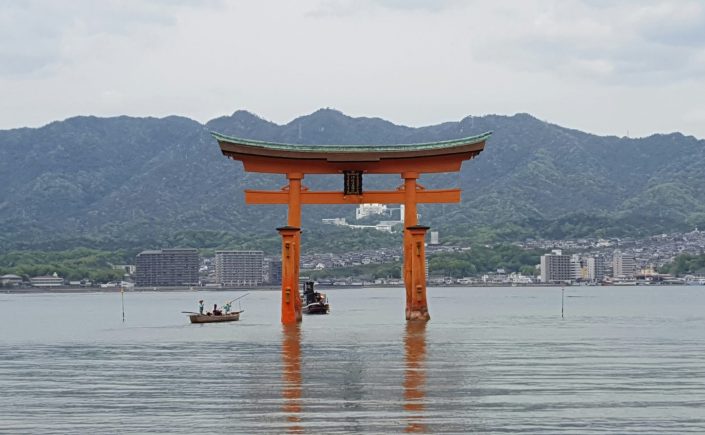 It was raining today, so I picked indoor activities instead, but I still cycled around since it’s the easiest way to see different sites. The Hiroshima Peace Memorial Museum was really interesting, it contained three parts: the impact of the bombing in 1945, the recovery period afterwards and the stories of the victims and their families. It was very intense and it was hard to fully comprehend the devastation during the bombing and the years of recovery afterwards. It destroyed more than 90% of the city and killed 140,000 people, not including the people who experienced radiation related illnesses afterwards. Nowadays there are nuclear weapons that are hundreds of times more powerful than the bombs that struck Hiroshima and Nagasaki.

Diagrams of buildings destroyed in Nagasaki (left) and Hiroshima (right)

In the recovery period there were morale boosting figures, like the Hiroshima Carps, a popular baseball team and a superhero made of bread, based on the truck that drove around and gave people free bread. They set up a system where people could send money to support children who lost their parents, since foreign adoption wasn’t viable at the time. The last part of the museum was the most emotional part, they had a collection of the possessions left behind and photographs of the sites surveyed afterwards. 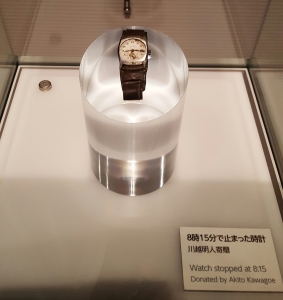 Afterwards I had some lunch and wandered around the city centre until I found the Contemporary Art Museum, which featured some international work and separate sections for audiovisual art and silkscreen printing. The first picture with the huge carp is common at the moment, the first week of May is Golden Week (GW), a week of celebrations when most Japanese people will have paid holidays. All over town you can see these big carp streamers on flag poles, ready for Children’s Day which is on the Friday of GW. The downside is that accommodation is booked out everywhere, so that makes things a bit tricky. 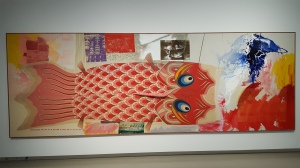 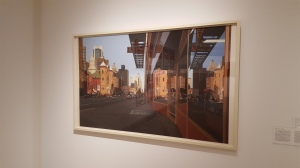 The artist who designed these tyre tread prints had written a complicated article about the difficulty behind getting his work just right. He had given up on it for a little while, until he came across a computer programmer who helped him set it up, using FORTRAN, a somewhat obscure programming language that I learned in second year uni.

The weather was much better today, so I took the ferry to Miyajima Island, which is home to the iconic O-Torii Gate and lots of different temples. There are wild deer around the island and the place had a very peaceful and 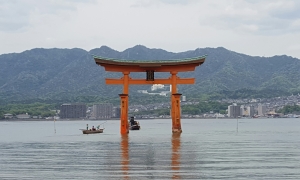 My favourite temple was Daisho-In Temple, which had several large halls and interesting pathways, like the the staircase with the 500 Rakan Statues. Some of the statues have hats or bibs, which is how they are depicted in pictures and people knit clothes for them. 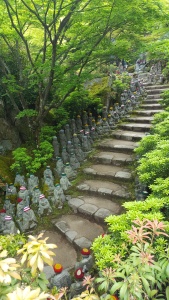 The hike up to Mount Misen took 90 minutes and the path was lined with shrines and a stream running along the side. It was a steep climb, but the 360 degree views at the top were awesome, in the distance you could see other islands and the oyster farms surrounding the island too. The descent was much easier and Momijidani Park at the bottom was actually restored after an avalanche caused huge boulders to flow down the river.

Picnic spot at the top 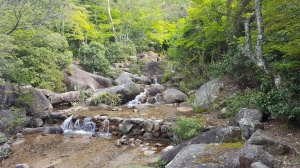 I spent a whole day on the island and headed back to the hostel where I met an American who was teaching English in Japan as part of the JET (Japan Exchange and Teaching) Program. It was cool to hear about his experiences in Japan and we ended up walking into town to see the A Bomb Dome and Hiroshima Castle when it’s lit up at night. 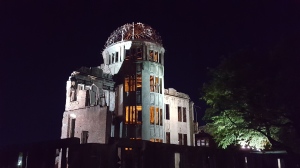 I spent my last day in Hiroshima relaxing in parks and getting ready for the next week of cycling to Osaka. First I headed to the Peace Memorial Park, which had dozens of different sculptures and monuments to remember the lives lost. The A Bomb Dome was originally meant to be demolished, however it has been preserved as a reminder of the tragedy. The reason it is still standing is because the bomb detonated 600m above it, causing all the windows, roof and walls to collapse, but keeping the central dome intact. 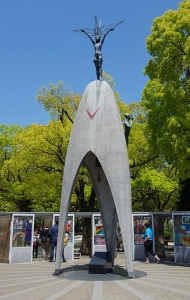 Children’s Peace Monument, in the background there are different works of art made from paper cranes

For lunch I had okonomiyaki one last time at Nagata-ya, the top rated restaurant in the city. The place was packed and they had a very efficient production line going on and it was cool to see all the different flavour variations being stacked up too. 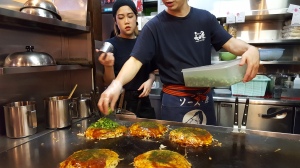 Next up I went to Shukkeien Park, which had tea rooms around the edge and the park itself had miniature land features like a waterfall, mountain and rice paddies. For 100 yen you could buy a packet of food to feed the koi and they swarmed to get their share. Further up the road I went past Hiroshima Castle, which was originally built in the 16th Century, but was rebuilt in 1958.

The lucky last stop for the day was Mitaki Temple, which was a short detour on my way back to the hostel. It sat at the top of a steep hill and once you entered the gates, it went even further up the mountain, with a stream running along the side and waterfall at the top. It would have been hard to reach without a car or taxi, so it felt like I had found a little hidden treasure.

Overall I really enjoyed my stay in Hiroshima, it was a bonus that I met some cool people in my hostel and managed to see a lot of cool things. It was great to have a proper rest before my next seven days of cycling to reach Osaka.