As I left Sault Ste Marie, a group of cycle tourers rode up alongside me and invited me to join their bike bus. There were five of them, Jenna and Aaron (a pair of friends who just finished their engineering degrees), Amy and Matt (married couple starting their ride around the world) and Stephen (their friend from church). It was so fun to ride as a group and it felt so much safer on the highway too. 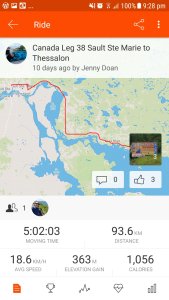 We stopped at the giant loonie (a $1 coin) for a cheesy photo and exchanged stories about why we were all crazy enough to cycle across Canada. We all got along really well, it was quite a coincidence that we’re all 24 to 27 years old and heading in the same direction. Plus I really needed the morale boost since the Northern Ontario roads were so physically and mentally draining.

Once we reached Thessalon, the bike bus ended up staying at a campsite in town and I headed to a warmshowers place a few minutes east. It was funny to arrive and meet the goats, chickens and cats, although all the cats being inside was a bit much. My host was nice and all, but his place was a bit dusty, so it wasn’t my most comfy night of sleep.

Today’s ride was long, but there was a killer tailwind, so our bike bus really flew. We stopped a few times for lunch, snacks and some breaks, which was a luxury, compared to the remote road between Thunder Bay and Sault Ste Marie.

The ride ended up being 125km (I accidentally cut off the first bit of the journey) and we eventually arrived in Massey. It was Stephen’s birthday (on the far right) today and we had a big dinner to celebrate, his friends even brought him a cake from Sault Ste Marie. I shared my motel room with Jenna and she helped me plan out some other segments of my journey, since she knew a lot more about cycling around Ontario.

It was the last day that our group would be riding together, so we started with a big breakfast at the town’s bistro before riding along a nice back road for the first 30km. We had the whole road to ourselves and just chatted and cruised along.

Once we reached Espanola, we stopped at a McDonalds for lunch (where they had 56 cent cheeseburgers), and prepared to go our separate ways. We took some photos together and I introduced them to Mr Banana, my comically large banana that I bring with me, instead of a sleeping bag and tent like everyone else.

The bus in action! 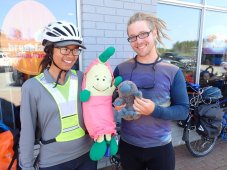 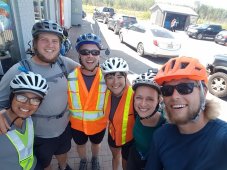 The bike bus, close up

After our goodbyes, half of the gang headed north, while Jenna and I headed south to Manitoulin Island. There were still some hills to tackle, but we made it to Little Current and found a warmshowers place, where they had some tents set up. After five months, it was my first time camping outdoors and it was a cool experience. Our host opened his home to cyclists and anyone looking for a place to stay, in exchange for working on their farm. They cooked up some incredible pasta, risotto and salad for dinner and made us feel right at home. I was so tired and ready to go to bed, but I was also excited because it was going to be my 27th birthday tomorrow. 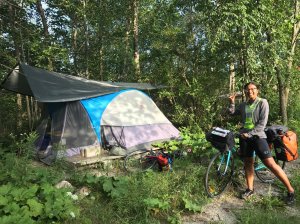 The bus in action!

The bike bus, close up