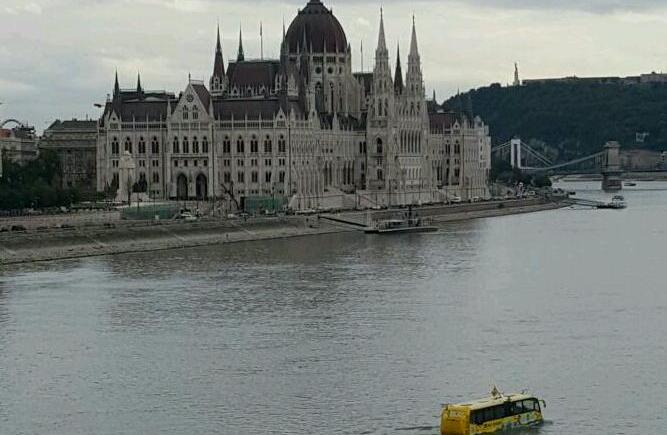 The day started with a walking tour with about a dozen people from our hostel. It started around the corner, at Parliament and we strolled toward the Danube River.

In 1873, three cities joined to make Budapest: Buda and Obuda on the west side of the river and Pest on the east side of the river. Our hostel was on the Pest side, but on the other side there were loads of churches, museums and the palace.

St Stephen’s Basilika is a tribute to their first king, over 1000 years ago and if you go inside you can see his preserved right hand.

The walk to the top of the palace was a bit tough, my legs were still a bit sore from the 130km yesterday.

The walk back to the hotel took a little while, but it was worth it to see a bus driving through the river.

After some well deserved rest, we regrouped and went out for dinner, the good was nice and it was cool to mix with such a diverse group.

Afterwards we went out for some drinks, to a ruin bar called Szimpma Kert. It was a bit pricey but it was really cool and laid back. We managed to find some more Aussies and had a good time.

The walk home was good and even though it was Wednesday night, heaps of people were out and about.

The next morning I packed and rode to the airport to fly out to Istanbul and meet up with Leo (who I’m cycling with for the next skx weeks). I gave myself an hour of extra time but I still missed the flight and I was absolutely kicking myself for it. It was a combination of poor weather, incorrect directions and me not being as prepared as usual.

I just had to reschedule for tomorrow and find accommodation nearby for the night. I stayed at a tennis club and tried to get some sleep. That didn’t really work so I did some origami to calm down a bit.

I decided to go to a nice place for dinner and use up my Hungarian money. After riding 3km I accidentally bumped into a cyclist in front of me and totally stacked it. I always keep a bandaid in my wallet, so after cleaning up my grazed knee at the petrol station across the road, I continued on. I went to Zila Coffee house which had several award winning cakes. Dinner was great and for dessert I ordered Hungary’s cake of the year for 2014.

I considered ordering cakes until my knee stopped hurting, but I didn’t need cake, I needed more bandaids. I had 4km to cycle home and my knee was getting pretty gross, but I had to keep going anyway. I was a bit annoyed because I had another 4km to cycle to the airport tomorrow. I was feeling in the pits so I just slept it off, at least tomorrow I’d see my good friend Leo in Istanbul.