Our first scheduled ride day started off with a lot of pessimism, after three days of waiting and hours at the airport, we didn’t think Leo’s bags would show up. We went to the airport one last time, which takes at least an hour each way and we were told that one of the couriers had the bag in his hands and it would be delivered in an hour. It sounded too good to be true, but we had lunch and headed back, quietly hoping the bag would magically be there.

Leo was reunited with his bag and lovingly embraced his panniers packed inside. After showering, assembling his bike and getting our route prepared, we departed at 6pm.

We estimated the ride would take five hours, but we were way off, the total time including stops was 7.5 hours. Even though it was Sunday and we were traveling in the opposite direction of peak traffic, it was so busy and terrifying. 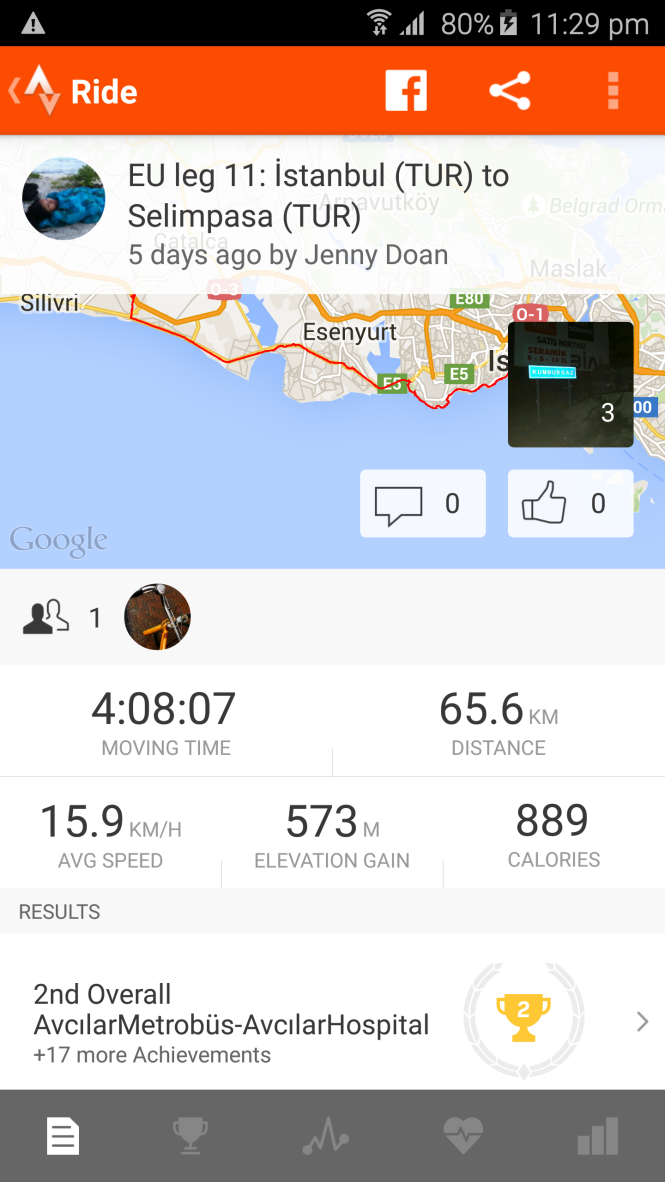 Most of the pictures are on Leo’s camera so I’ll have to load them later. The start was nice, as we went along the waterfront and a beach, but the highway section was intense. With over 14 million people in Istanbul, and hardly any bicycles, motorists weren’t used to our presence. Cars were close to wiping us out and we had to be really careful to make it out of the city safely.

At 11pm we had a break for dinner and it was surprisingly good. Mentally, we needed a break from the chaos and a chance to rehydrate in peace.

Getting back on the bike was a little tough, but we had been climbing for a while so we were waiting for the downhill. Descending from such a height is scary in the dark, as we picked up enough speed to overtake cars, but we focused and stayed in control.

We were impressed by the sheer volume of cars, there were three lanes of gridlocked traffic, stretching 50km out from the city. Eventually it calmed down and by 1.30am we arrived at our hotel. It was on a highway and there was nothing nearby aside from a bus station and loads of parked trucks. We were far from fussy, just showering and lying down was a treat. One ride down and 29 to go…