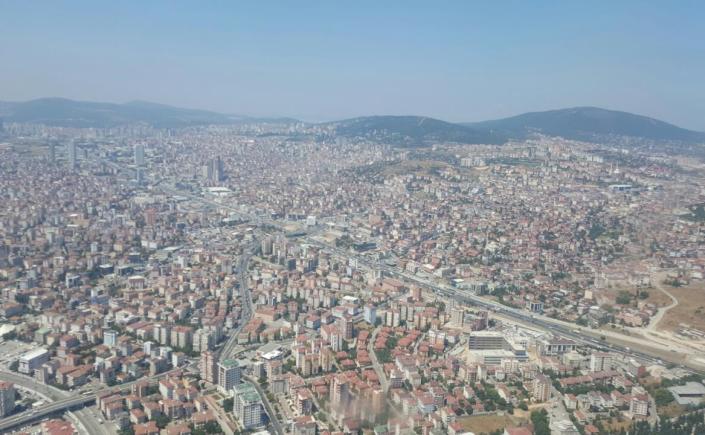 I was looking forward to seeing Leo, we had an adventurous 2500km of eastern Europe to cover and so many memories and stories to create along the way. Unfortunately his journey didn’t start off very well, none of his luggage arrived and it was impossible to get any clear answers from the airline or luggage services. I was nervous that the same thing would happen to me, but all I could do was hope that my bags would make it to the other side. After missing the flight yesterday, I gave myself plenty of time to make it to the airport and get my bike sorted out. It was good fun, I took my bike apart and had it wrapped like a giant present. The flight went smoothly and I met some really cool Canadians who were going on a cruise through the Mediterranean.

Upon arriving in Istanbul, there was a queue of maybe 500 to 1000 people waiting at passport control and five counters open to process everyone. It took an hour and a half to get through but once I made it to the baggage claim area it was all okay. I spotted my bright green bike straight away and ran over to hug it and put it back together.

I took a shuttle from the airport to the hostel and it was awful. The driver took three hours to make it to town instead of two and only one out eight passengers made it to their accommodation, everyone else stormed out due to frustration and possibly car sickness. I was second last off the shuttle and learned that the driver’s phone plan was out of data, so he wasn’t using any Google maps or any GPS for directions, just the Istanbul map you get from the brochure rack at the airport.

That explains why he was going in the opposite direction down one way streets and playing chicken with so many other cars. I eventually walked to the hostel and found Leo in the basement and received a giant hug. He explained what happened to his stuff and we spent our Friday night chatting to a Canadian couple in our dorm, having dinner and sleeping early.

The next morning Leo showed me around town and although it was beautiful, I felt intimidated in such a busy and different environment. It felt strange to be stared at with such intensity and even though I wasn’t in any danger, I couldn’t help but be a little paranoid.

We caught up with Leo’s new friend, Carl, an Irish guy who also lost his luggage too. Both of them were wearing the same clothes for the third day and rejoiced over recently purchased underwear. It was quite a warm day, so we headed underground to the Basilika Cistern. It’s over 1500 years old and comprised of hundreds of marble columns and some creepy Medusa sculptures.

We had lunch in a little courtyard and then I went nuts in a sweets store.

I had five treats and they were all so delicious and sticky, I understand why it came with two moist toilettes.

We strolled through the Spice Market and I was mesmerised by all the colours and variety of goods for sale. I tried the Turkish delights and walnut stuffed figs and they were all amazing.

We went back to the hostel and I had a nap while Leo spent an hour and a half chasing up the luggage services to find his bag. They delivered the bike and claimed to deliver the bag with all his other stuff, even though they didn’t and then declared the missing luggage report as closed. The situation wasn’t going anywhere so we went to the airport to talk to them face to face. The long ride on public transport and shoddy customer service wasn’t ideal, so the trip took four hours and in the end they said maybe it would be there tomorrow.

We had planned to leave Istanbul tomorrow, so things were not looking good. Even though we planned so much of the trip, this part was out of our hands. I had a few plan b and plan c options floating around in my head and tried to stay positive. The city was starting to wear me out and I wanted to get out ASAP, so I really hoped for a good outcome.