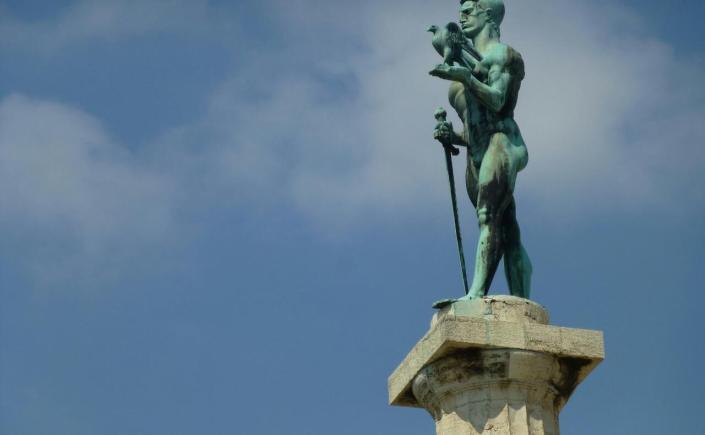 We took it easy today and caught the train from Vrsac to Pancevo and cycled for only the last 18km.

We arrived in Belgrade after lunch and went to explore the city, Leo went on the communist tour and I went on the free walking tour. Both started at Republic Square, near statue of Prince Mihailo, who freed Belgrade and 6 other Serbian cities from the Turks in the 19th Century. In the background you can see the National Theatre (and hear the opera from the square too) and the National Museum on the left has been closed for reconstruction for the past decade.

Our tour guide, Melica, was born and raised in Belgrade and has such a passion for her city. She showed us around different districts and even let us try some homemade rakija, which is type of brandy in the Balkans.

As we headed towards the fortress at the river, we could see why Belgrade was such a sought after city. From the top you can see enemies from afar, as well as the meeting point for the Danube River and the Sava River. The tour ran late and I ended up just getting dinner in town and having an early night.

The next morning I had a bunch of errands to take care of and hoped I could get them all sorted without procrastinating. My bike had a few things here and there that needed fixing, so I took it in for a full service. Ubishu (not sure if that’s the right spelling) did a great job and soon enough I was riding smoothly again.

For the remainder of the day, I sent out seven postcards, which I meant to do a month ago, then headed back to our accommodation. Leo was already there, doing a job application and we ended up chatting to other guests staying there too. In the evening I wandered around town and I eager to find some good food and sweets. It was cool how active the city was and it seemed like everyone was so relaxed and just happy to be outside. I felt a bit lazy during my time in the city, but honestly I was just exhausted. Unfortunately the weather was getting warm again, the cooler days recently were just a fluke, so there are some tough days ahead.