The Norikura Skyline is the road leading up to Mount Norikura from the Gifu side (west) and it opens mid May, while the Norikura Echo Line is the road on the Nagano side (east), which opens start of July. Since it was late May, there was still heaps of snow at the top and there were cyclists, skiiers and tourists taking advantage of the nice day. Private cars aren’t allowed on the road, so there were only occasional buses coming past me as I went up. The Skyline officially starts at Hirayutoge Car Park, where I left my pannier bags, and after a bear warning from the ranger at the booth, I was on my way.

My Strava records below tell the story, there were heaps of hairpin turns and an average 7% gradient, although there were pockets of 12% gradient thrown in there just for fun. My speed shows a little slump towards the end when the exhaustion started setting in, but it picked up when I rode alongside a friend, Ippei who I met at the parking lot at the start. 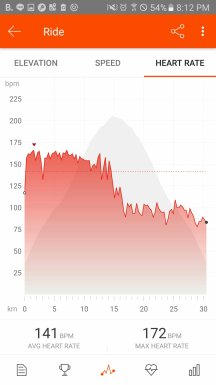 The scenery was epic, I started taking photos after I covered the first third of the journey, while I was still fresh and maintaining a steady pace up the hill.

Norikura Skyline, 1/3 of the way up

After the second third of the ride it started to hurt, I was up to 2400m elevation, with 300m more to go and I had never cycled at this altitude before. The thinner air meant less oxygen for my struggling muscles, and stopping for too long during a break would be risky as it got colder towards the top. I ate some onigiri (little triangular shaped rice snack) and walked for a bit until I was halfway through the crazy hairpin turn below.

Norikura Skyline 2/3 of the way up

One of many hairpin turns, from this angle it doesn’t even look real.

My new cyclist friend Ippei came up alongside me and we rode together for the last 4km, luckily the last 2km were easy and we could take heaps of cool photos. 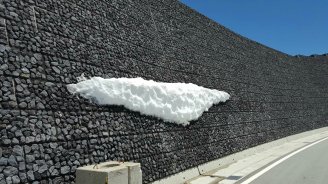 It looks steep, but this bit was only around 4% gradient, a breeze compared to the rest 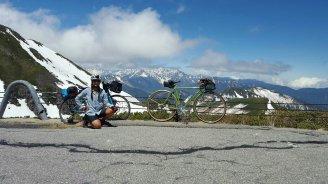 At the top we stood on the border separating the Gifu and Nagano prefectures and then headed to the bus terminal for a hot cup of coffee. It felt great to sit down and warm up for a little bit before the big descent. It was 1 degree at the peak and we both layered up to brace for the cold air rushing past as we barreled towards the bottom.

The snow walls on this side are up to 5m, but on the Nagano side they reach 15m in height

A lake and the bus terminal in the background

While I usually like freewheeling down mountains, this descent scared the hell out of me. Reaching speeds of 50km/hr is terrifying when you can see all the hairpin turns coming and nothing but a guardrail to stop you falling off the edge. I did my best to slow down and stopped at a few points to take pictures and drop some speed. 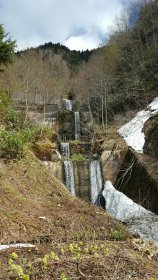 I felt a surge of relief when I reached the car park again, the ride had gone smoothly and I was mentally and physically strong enough to nail it. It’s up there among my cycling milestones and it will be a moment I will think about, the next time I’m struggling on a climb or wanting to give up. My legs were exhausted, but the excitement of my achievement gave me a buzz and a big smile for the rest of the day. I was already picturing my reward for the evening, a relaxing onsen, a big dinner and packet of chocolate covered biscuits.

One thought on “Japan Day 39: Cycling the Norikura Skyline”