After listening to thunderstorms and rain last night, I was pleasantly surprised by the clear weather this morning. My mission was to ride up Norikura Skyline, a 14km stretch of road that rises 1000m up to the 2700m point, making it the highest road in Japan. It was an epic ride and it’s in a separate blog post here.

But firstly I had to get to Hirayutoge car park, although it was only 6km from my hostel, it required 460m of climbing and took nearly an hour. On the bright side it was really green, shady and free of cars since the Abo Toge Tunnel provides a shortcut through the mountain.

I made it to the car park, took off my pannier bags and double checked I had everything I needed in my handlebar bag: food, cold clothes for the top and my bike maintenance kit. My pannier bags weigh about 12kg, so I felt much lighter without them and I was pretty sure that in Japan nobody was going to steal my bags from the parking lot. 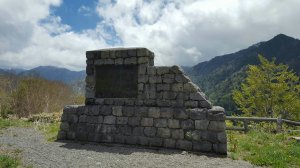 The ride to the top took about 2 hours, plus extra time for breaks and photos, which are all on this post. After I finished and came back to the car park, I rode an extra 5km to Hirayu Onsen, all downhill this time. On the way I met another cyclist, I recognised his bike from the top of the Norikura Skyline, it was particularly impressive because he took all of his stuff to the top and he had camping stuff on top of all the regular touring kit. He was incredibly modest and I took some time to sign his guestbook, which was filled with messages in different languages. I wasn’t sure exactly where he was going, but it was definitely further than me and most likely uphill.

Norikura: This cyclist hauled all of his stuff up to 2700m elevation too

I rolled into town and easily found my accommodation, it was a large resort style building with a nice entrance, fancy lounges and onsens. My room was only 1900 yen (~$25 AUD) which is cheaper than most hostels and definitely cheaper than the other options in town (starting around 6000 yen per night). The down side was that the room was tiny and I could easily touch both walls with my elbows. I ended up doing the same as everyone else, relaxing in the onsen and then picking a recliner chair and blanket in front of the TV. Unfortunately I had one more ride before my rest day, so I did my best to rest before pushing myself just a little further.

An amusing pun, the hot springs here contain sulfur, which smells like farts.

A nice garden outside the resort

Extra large udon with tempura and way too many sprouts

The nap room, with fully reclining chairs and blankets 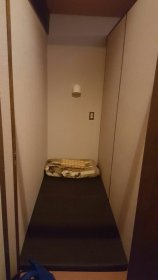 My “room” for the night
Advertisement